Part Pages That May Require Explanation

Just as the full score contains notational complexities, so do the parts. While all of the part pages are designed to be self-explanatory, some of them may still prompt questions from the players. These will be easier for the conductor to answer if the conductor can see the part pages in full. What follows are the part pages in question that require special understanding. Each is preceded by a written explanation of the issue (or issues) on the pages and how the graphics of each page should clarify the problem and its solution.

This is perhaps the most difficult passage to communicate graphically. If Extra Violin II is played on stage, the two Desk 6 players initially play independently of the main orchestra, but then one of them rejoins the main orchestra while the other continues to play independently. This requires a two-page spread in which one player reads from one page and the other player reads from the other page.

As formatted below, Player 2 reads from the left-hand page and Player 1 reads from the right-hand page. At m. 142, both players join the “strict tempo” group with the Saxophone, Bassoon, and Percussion, most helpfully directed by an assistant conductor. At m. 146—which will have been reached by this independent group at its own moment in time—Player 1 rejoins the main orchestra while Player 2 continues independently, maintaining the previous tempo. Player 2 continues the written pattern until cued by the main conductor at approximately the second quarter beat of m. 149, at which point the Low Bells must then enter and articulate the structural tones of Player 2. Those two players must continue in this fashion through the “Vanity Fair” section until its end, at which point (m. 161) Player 2 must rejoin the main Violin II section. Player 1 is advised to cue Player 2 at that point.

A page turn is normally performed by the left-seated player at a Violin II desk, and in this case it would be Player 2. But this instance is unique: upon finishing the left-hand page, that player may habitually begin reading music from the top of the next page, when in reality the next page should be turned. Thus, as a preventative measure, a page-turn reminder is indicated at the bottom of the page so that the player flips the next page instead of playing the next page. 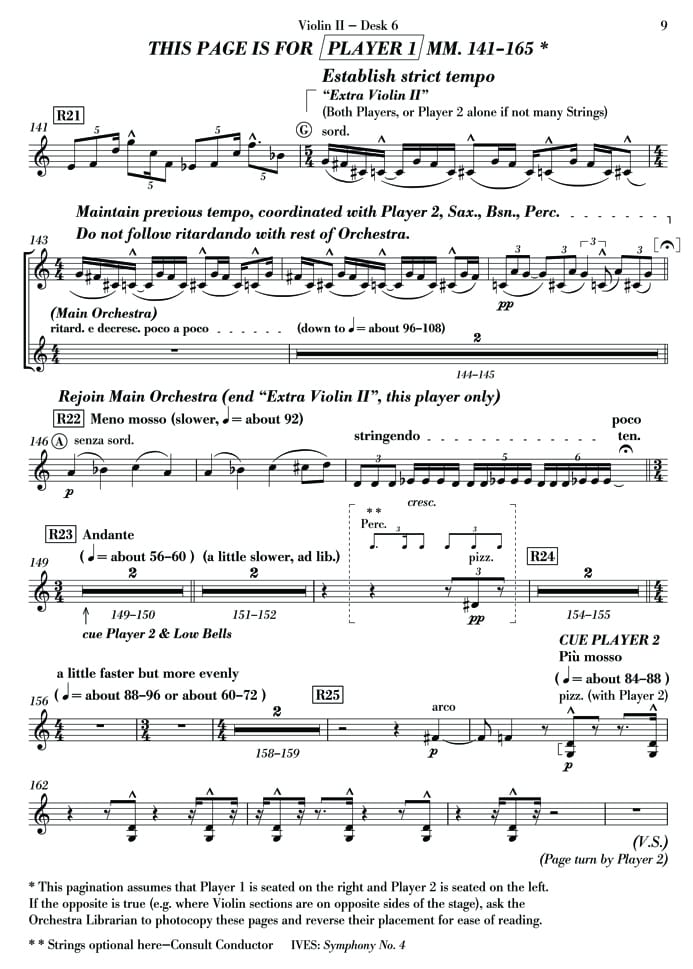 Here again the two onstage players diverge: Player 1 rests, while Player 2 plays the noodling Extra Violin II theme at an independent tempo, approximately 5 quarters (t) to the ^8bar. Player 1 should turn the page and cue Player 2 to rejoin the Main Orchestra at the end of the passage:

Additionally, there are two different possible page turns here that depend on whether the Extra Violin II players are separate, offstage (i.e., spatially removed) players or whether they are simply the onstage Desk 6 players.

Therefore, if the Extra Violin II players are offstage (i.e., spatially removed), then they will simply be reading from the dedicated Extra Violin II part, and this passage should pose no problem. The onstage players sitting at Desk 6, however, should flip ahead to page 18 and finish the movement by playing pp. 18–19, which contains the main sectional music.

However, if the Extra Violin II players are, in fact, the onstage Violin II Desk 6 players, then they should simply turn to the next page (p. 16) and play the remainder of the movement on pp. 16–17 (containing the “Extra” music).

And p. 18 begins with this boxed message:

Here the onstage players at Viola Desk 6 likewise diverge. Player 1 plays with the main orchestra and reads the material in the upper box on the page. Player 2 acts as the Extra Viola and plays independently of the main orchestra, entering approximately on the third quarter beat of m. 149, and then repeats a fantasy on In the Sweet Bye and Bye until the second quarter beat of m. 161. Player 1 is instructed to cue Player 2 to stop playing at that point: 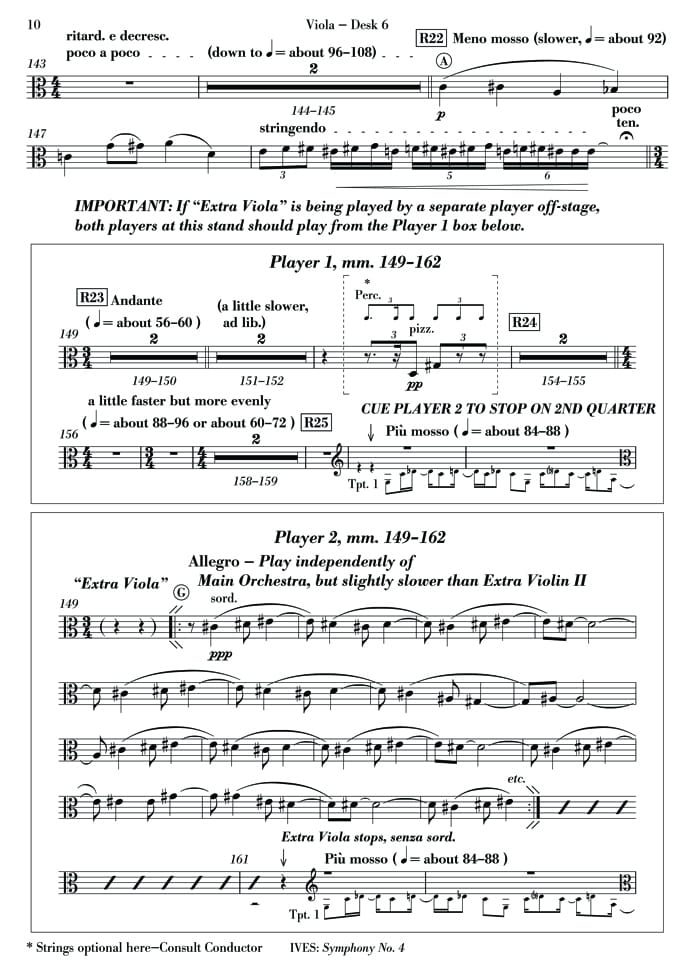 In other words, the Secondo Piano may take the triplet rhythm of m. 203 (“this rhythm”, he writes):

It is interesting that the triplet rhythm at m. 203 as it stands is an isolated rhythm, confined to that measure alone, and is not extended beyond that measure (this is a subject for analytical speculation by readers of the score, and is beyond the scope of this discussion). But perhaps because of its isolation, Ives considered the possibility of starting with the triplet rhythm at m. 198 and continuing it through m. 203. Ives may also have thought that a pattern in #2would keep both players in the same meter (notice that this is from one of the two #2vs. $4sections).

The Orchestra Piano part contains an appendix on its pp. 52–55 in which a realization of this alternative rhythmic pattern has been written out twice. First it is provided in a version in #2, Ives’s main meter for the Orchestra Piano in this passage. However, this version is potentially misleading in its presentation of the triplets beginning at m. 200: They may erroneously appear rhythmically identical to the triplets of the preceding @4bar of m. 199. Therefore, a second version is provided in $4: it should clarify the true rhythmic values of the triplets that begin at m. 200. 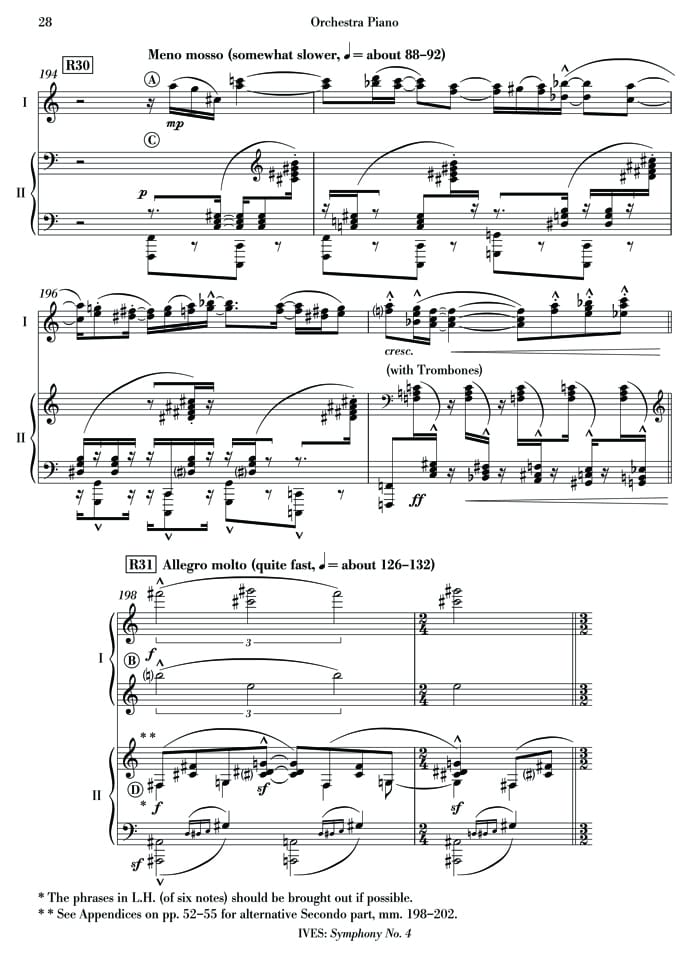 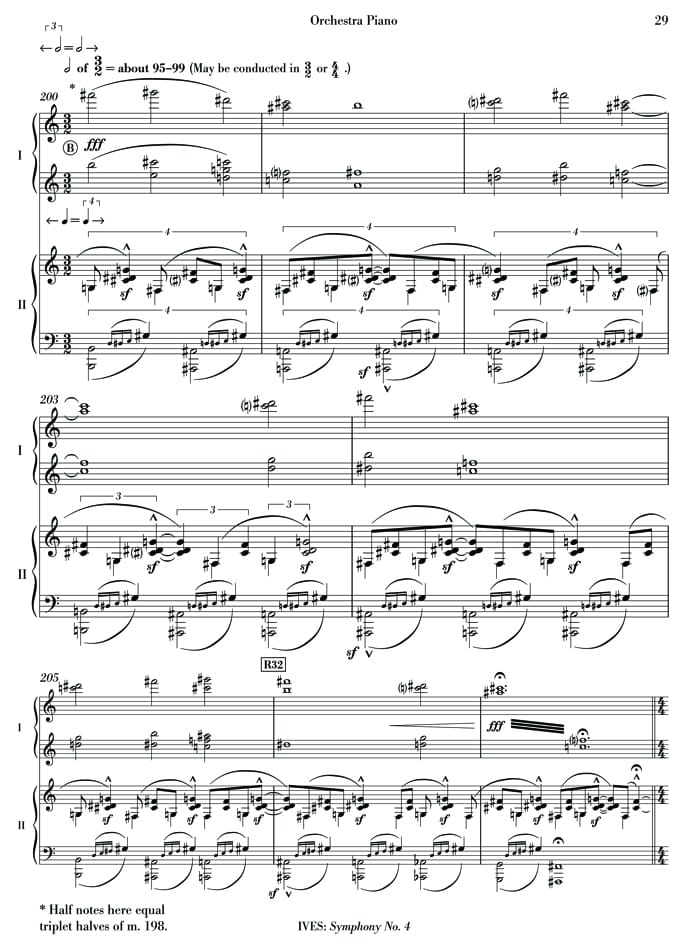 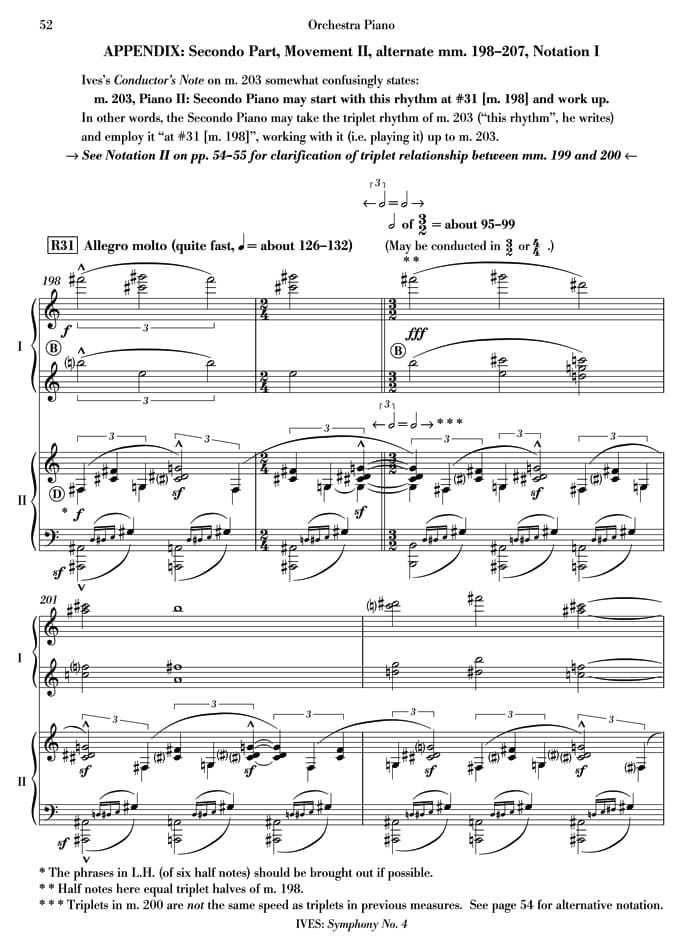 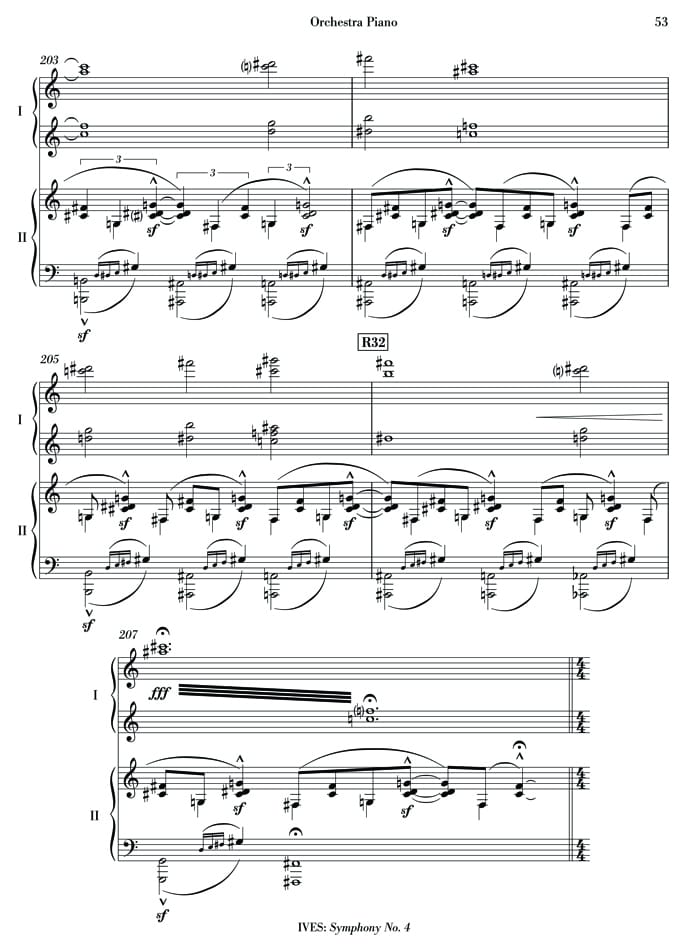 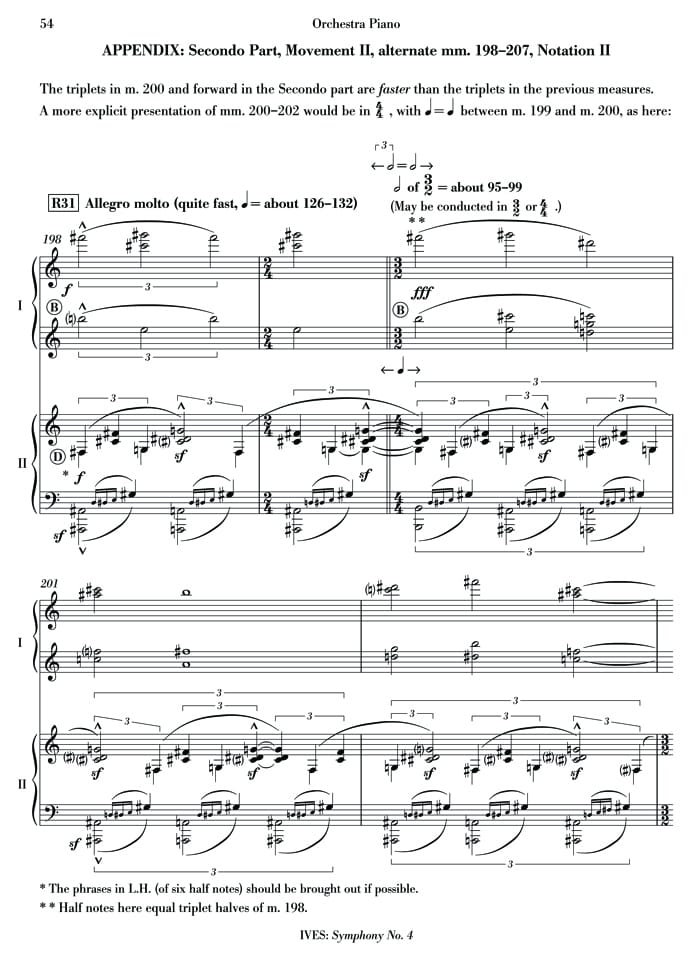 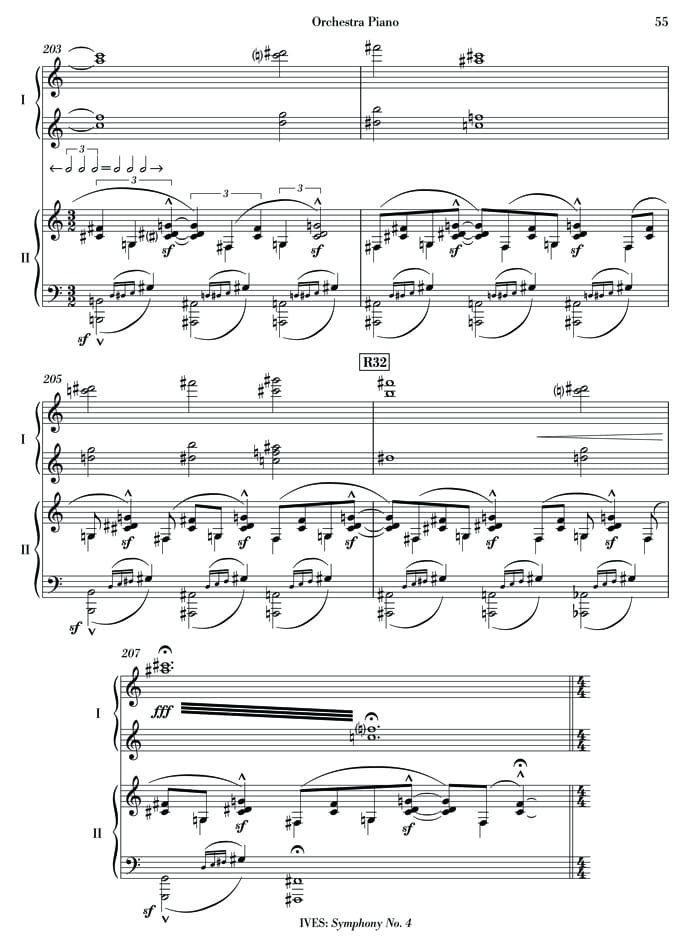