Alternative Notations in the Parts

Many of Ives’s rhythms involve subtle shiftings of beats and complex subdivisions with internal rhythms. These may cause rhythmic parsing difficulties for players when they are first encountered. Where possible, alternative renotations have been supplied in the parts on secondary staves.

In all cases, the version that is more likely to be read and preferred by the player is presented on the top staff. That way, it will be closer to the tempo indications, rehearsal boxes, measure numbers, and other information relevant both to rehearsals and to performances.

The rhythmic translation of the Trumpet call here is far easier to parse than the original:

Here, the rhythmic translation of the Viola part, which is representative of all the instruments in Group 2, may be more complicated to execute than a straightforward reading of the regular triplets set off by an eighth rest (R). Either an assistant conductor or a careful explanation and conducting technique will serve the original notation of the passage: 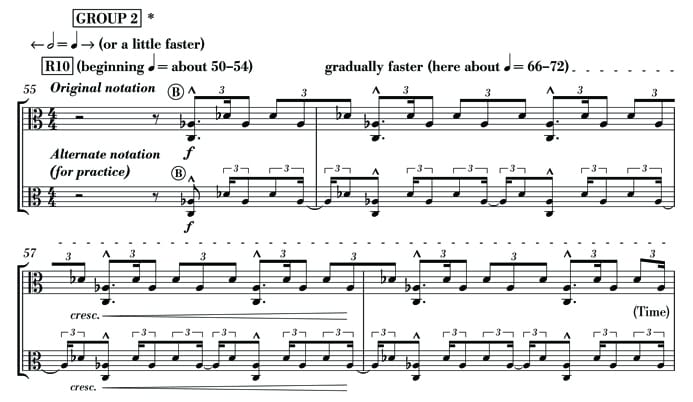 The rhythms of the Trumpet 1 part here represent the difficulties for all the Trumpets and Clarinets of Group 3 in this passage, in which all triplets are offset by a sixteeenth rest (E). While the translation might prove instructive for rhythmic analysis, it is most likely useless for rehearsal and performance. Helping the players learn to play the triplet pattern just after the beat (perhaps listening for the Triangle and Snare Drum for a coordination pulse if they are close and audible) would be a better solution: 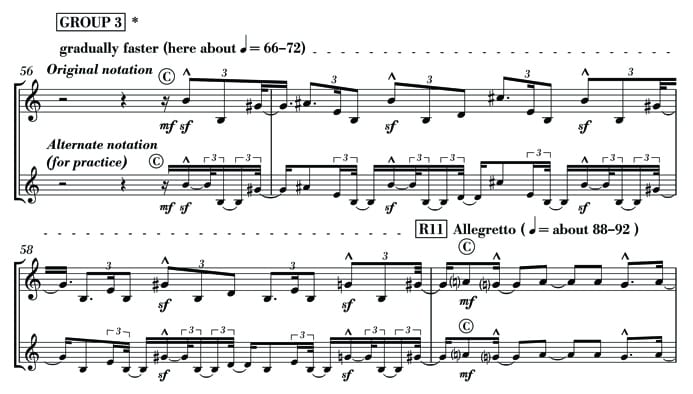 The notation of the Violoncellos here is representative of the nested triplets that they, the Violas, and the Saxophone must negotiate. Most likely, this requires no assistance from the conductor, and the initial quarter-note triplet in the alternative notation is a good enough starting point for feeling and executing the intended rhythm of the measures:

Ives explains in his Conductor’s Note that the High Bells start on an offbeat here and “play almost extempore” to the end of the passage. The rhythmic translation should pose no problem for the player; the original notation is merely a guide to the intent:

In this passage, the Flutes, Oboes, Clarinets, and all the Violins play internal triplets within a #2meter that conflicts with the main $2meter of the rest of the Main Orchestra. The rhythmic translation would be exceedingly difficult for the entire group to coordinate accurately, and thus the passage would be better served by an assistant conductor. Here a Violin part represents the passage for the entire group: 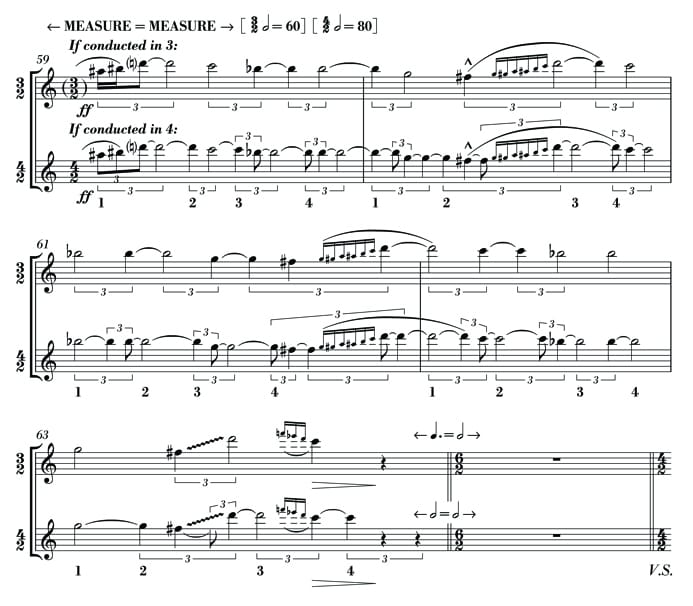 The eighth-note quartuplet groups played here in the time of dotted quarter notes (t.) may or may not be more easily read from the analytical renotation, so the latter is shown on the lower staff: 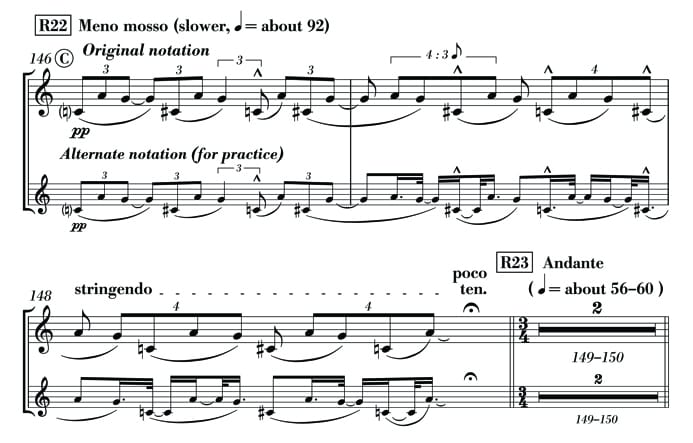 In mm. 121–122, the High Bells simply continue their quartuplet motion at the same speed:

The simple offset triplets here contain a difficult internal figure: groups of filigree grace notes in flourishes that fall in between the triplet notes. At first blush, it would appear that the grace notes have no rhythmic precision intended. However, Ives’s MS notation for this passage begins with this for the first flourish:

This implies that the grace notes that follow are but a shorthand for a metered figuration. Further proof of this is found in the MS sources to mm. 48–50, in which Ives consistently writes the grace note figure across the barlines; this was done even in the player’s parts to the 1927 premiere of the Comedy, in which Ives thickened the barline at m. 50 in each part to emphasize the bisection of the grace note sequence between the measures.

In the two Flute parts, therefore, a metered realization is presented along with the gracenote “shorthand” version. The conductor may choose to instruct the players to follow the metered realization exactly or to allow a more freely-styled performance: 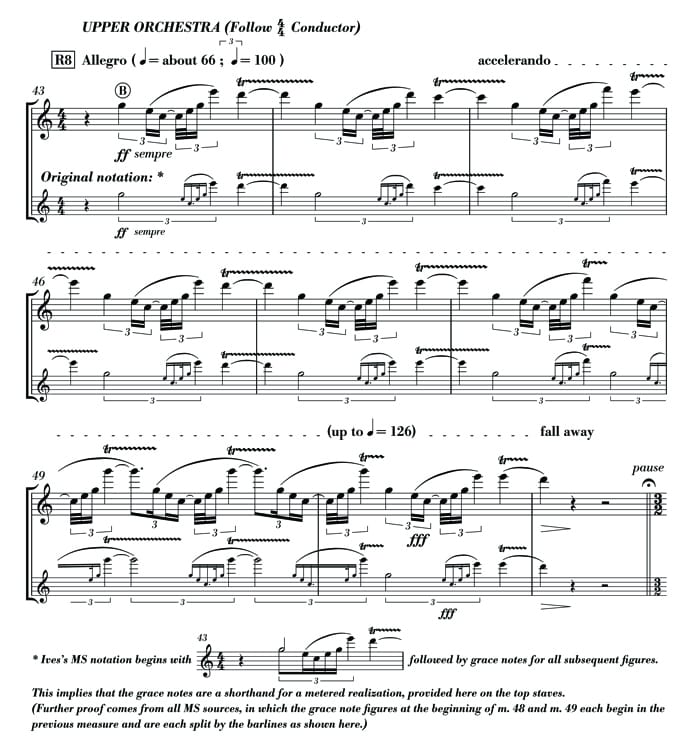